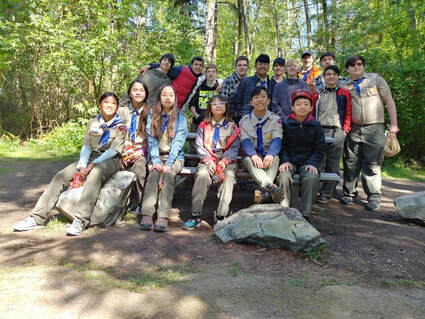 Over the weekend of April 28th, Troop 455 held the Rank-Up Bootcamp which is an annual
outing we go on to help new scouts get Scout, Tenderfoot, Second-Class, and First-Class
requirements signed off. We camped at Dash Point State Park, which is a park just north of
Tacoma. The scouts in attendance were, Aldion, Anders, Ben S., Ben W., Cameron,
Charles, Henry, Jared, Liam, Max, Nate, Nathan, Nathaniel, and Nicholas, as well as from our
Sister Troop: Aubrianna, Olivia, Aimee, Sophia, Alexis.

We left the Church around 5:30 P.M. and drove down to Dash Point. While setting up camp I personally noticed that everyone in the troop was doing a great job of simultaneously setting up a tarp structure to protect our gear from rain and teaching knots to the new scouts. We also got the tarp structure up pretty quickly, not our record by any means but we did a great job setting up.

The next day we went through the arduous process of waking everybody up, then we had breakfast and a little while later left for our 5 mile hike. I noticed that everyone was having a fun time and was very energetic on the hike. We would have random spurts where we would just sprint down the path and mess around. When we got back to camp we taught basic skills such as the tote'n chit. Later our troop was invited to a friendship fire where we performed three skits, If I Were a Boy Scout, Funny Men, and The Genie, with Funny Men clearly being the best. I think it was a great day, the new scouts were learning, the old scouts were having fun, and this also marked the first real outing we have gone on with our Girl Troop.

Some notable events involve Mr. Reinemers windshield being attacked by a flagpole, running through a forest at night, and, of course, Funny Men.